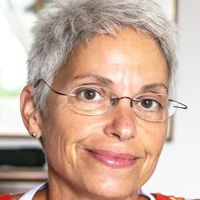 Cesarina from 2018
My speciality: Celery, turnip, pumpkin and carrot soup with croutons
I live in: Padua
I speak: English, German, Italian

Our Cesarina awaits us just outside of Padua, the beautiful city situated in the center of the Po Valley. From Paola's house, close to the countryside, we can enjoy a glimpse of the landscape that characterizes these areas, that of a scene depicted on postcards, interspersed with narrow footpaths, canals, villas, and cottages. Lands that have given life to a strong rural culture, which has created delicious dishes with few ingredients.
It is a culture that has greatly influenced Paola: "My maternal grandmother lived in a farmhouse with a garden in front livestock out back. She cooked with a mythical wooden stove, with concentric rings, on which I always found a pot boiling. My other grandmother, from Lecce, made pasta from scratch with whole wheat flour, she dried tomatoes on the roof of the house, figs with almonds. With the vegetables, she could make anything. It was from her that I caught the passion that animates my dishes."

- Marinated radicchio of Treviso and Fiolaro broccoli of Creazzo

Our hosts are regularly updated on the latest hygiene and social distancing protocols, for everyone’s safety and peace of mind.

Our team of Culinary Guides are there every step of the way to provide personal assistance and tailor your unforgettable experience.

Your safety is priceless. Our payment system provides the best transaction security guarantees. Furthermore, you can cancel your booking up to 24 hours before the start time with no charges

Discover other hosts in Padua