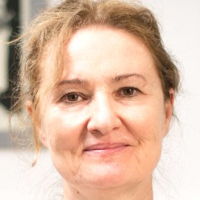 Angela is a journalist on one of Rome’s main papers. Whenever she has a spare moment she dedicates herself to cooking, her all-time great passion. “I began cooking as a girl, when I would go on holidays with my friends - she explains - I would prepare quick pastas with fresh tomatoes and then little by little I reached more elaborate dishes. Cooking for others makes me happy”. This passion for cooking comes straight form the heart, passed down from mother to daughter for generations.

Angela has also become a sommelier “Wine and food must get along, and they are the strongpoints of my cooking.” Her cooking is inspired by the typical flavours of roman cuisine, particularly tied to cereals and popular flavours.
Want to book this Cesarina?
Two destinies that join together

Twenty-five years working as a journalist for an important newspaper apparently leave only little space to the cooking, but, according to Angela, journalism and cooking are one step away one from the other. The journalist collects items, selects them, breaks them down in pieces and recomposes them into one again and the same happens in the cooking, where it is important the choice of the ingredients, whose union is something more than the mere sum of its parts, and every time is something different and unique. The key is to experiment, sometimes on purpose, others by mere chance, you leave the track, coming to experience entirely new and unexpected, sometimes successful and others less, obviously, of course, but the common denominator and driving force can be found in curiosity. This curiosity, this desire to experiment is a constant to Angela. Born at a time when women could not, should not, be in the kitchen, Angela has traveled and studied abroad and has made a career as a journalist. The passion for the culinary arts had to overshadowed but, although hidden, has always been peeping out: her friends, her dinner guests, have always felt special and cared as if at their homes, among the dishes of the tradition, and sometimes, the experiments fruit of the creative inspiration of the hostess. Angela has the cooking in her DNA, as any Roman family; her mother prepared the fettuccine in the time it takes the pasta to boil: a little miracle! From these solid and familiar foundations, the passion for the cooking of our guest was born. We are made of sensations and tastes, but also of history and tradition, let us now go through the streets of Rome, accompanied by Angela’s menu. We begin our journey through the tastes of the tradition starting from the winter bruschetta, that warms both the palate and the heart, then passing to what is the queen of the Roman soups, the wonderful pasta and beans with pork rinds. We are marvelously heated with these delicious dishes in the first part of this feast, but, as they say, appetite comes with eating ... and we are looking forward to the second part! Now the meatrolls in the Roman manner come, tasty meat rolls stuffed with ham, celery and carrots, covered with an incredible tomato sauce and accompanied by browned broccoli. The evening draws to its end, but we are not ready to say goodbye to our gracious host before having tasted her tart with ricotta cheese, honey and cinnamon, the apotheosis of sweetness.
The flavours of the eternal city
Under the Cupolone
Two destinies that join together