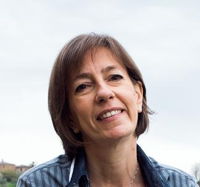 Barbara welcomes us in a corner of paradise near Siena, immersed in the nature of wonderful Tuscany, one of the most beautiful cities of the region.

A perfect location surrounded by the Sienese hills, where she loves to welcome her guests and serve typical dishes from her region. Our Cesarina is very careful about the choice of ingredients, she prefers organic products sourced locally. The vegetables are harvested from her vegetable garden, the flours are ground from ancient grains that come from a small stone mill near her house.

Want to book this Cesarina?
The products of the land

Barbara, our Cesarina, brings to the table dishes rich in natural and genuine ingredients. A cuisine made of flavuors never lost over the years, of products offered by the land.

A strong taste, an intense aroma, a simple taste. It doesn't take much to amaze and delight at the table: slices of toasted bread, fresh leaves of black cabbage and cannellini beans, as an appetizer, to follow the Pici all'aglione. A type of pasta made of flour and water with an elongated shape, similar to spaghettoni, that Barbara prepares by forming a dough with flour and then works with open and tense hands, with a movement that is called "appiciare", hence the name of pasta . The garlic sauce is made with a type of garlic that has become Slow Food Presidium, with the largest shape of the most common garlic and with a less strong and gentle flavor.

Following the Tegamata di cinta. The Tegamata in ancient times was the dish that was prepared in the evening when the pork was slaughtered, it was a real ritual that began early in the morning and ended in the evening with the inevitable pork pie, a real delicacy appreciated by everyone.

At the end the Pinolata Senese, a classic dessert of Tuscan origin with very ancient roots, formed by a soft dough stuffed with a soft cream, covered with pine nuts.

Summer on the Sienese hills