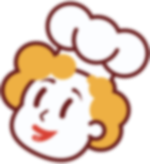 We are in Saronno, a small town in the province of Varese, a few kilometers from Milan. Here, in her warm and welcoming home, we meet Flavia, queen of the kitchen.

Cesarina Flavia always admired, and observed, her grandmothers (one from Emilia and the other from Puglia) in the kitchen. As soon as she grew enough to reach the kitchen counter, she started! Her first memory is preparing béchamel when she was six. Later, she learned how to roll out pasta dough under their guidance.

Today, the kitchen really is Flavia’s reign, full of utensils, ingredients and imagination... everything necessary to prepare delicacies that hover between modern and traditional.