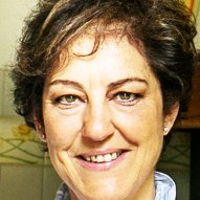 Rolling hills embellished by vineyards and olive trees, patches of forest and streams of gushing water. This is the picture postcard scenery that characterizes the Chianti area, a hilly region stretching to the west of the Arno River, and half way between Siena and Florence.

Antonella welcomes us in Greve, a town nestled in the beautiful Tuscan hills. Our Cesarina tells us that this is a small village characterized by a sober but very skillful cuisine. Here, the land’s produce reigns, the legacy of a peasant way of life. Simple but wholesome foods, therefore, able to create very tasty and tempting recipes, reflecting a very flavorful folk cuisine.
Want to book this Cesarina?
Bread and oil in the heart of Chianti

As our Cesarina Antonella tells us, Greve, a commune of medium height and tall hills between the mountains of Chianti and the initial lines of the valleys of Greve and Pesa, is characterized by its sober cookery, but of masterful knowledge, the heritage of farming life conditions that imposed the use of simple foods on the Tuscan population; one of these has always been "sciapo" (unsalted) bread, still present in a thousand different forms from the filone (loaf) to the ruota (wheel), from focacce bread to rolls with oil. Among the most famous, the canapès are accompanied here by the lardo (lard) of local pigs, raised in the Chianti region. The lardo, on this occasion, is flavoured with the so-called "the poor mans spices": rosemary, sage and garlic.  Florentine tradition continues with a dish that Antonella has inherited from her mother-in-law the pappardelle, egg pasta noodles which are around 3-5 centimetres wide. Normally served dry with game sauce, the pappardelle are proposed today with a black cabbage pesto. The peposo: prepared with beef, garlic, tomato, toasted stale Tuscan bread, salt, black pepper and wheat, accompanied by the cannellini beans that will be simply flavoured with a few drops of Tuscan olive oil, pepper, garlic and a sprig of sage. The day is concluded with a taste of ramerino bread, a sweet bread flavoured with zibibbo and rosemary, from which it takes its name.