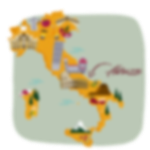 ‘Scrippelle’ is a traditional delicacy from the Abruzzo region, popular in towns such as Pescara , Teramo and Chieti. The recipe is similar to crêpes, a simple batter cooked in a hot skillet. Scripelle are not very well known in Italy, and are usually prepared for the holidays by Abruzzese families.

These delicious creations can be used as a base for many dishes, such as a timbale, where they are used divide layers of sauce. They can also be rolled up and baked in the oven like ‘cannelloni’, or simply cooked in a light broth, as we will find out below.

Here’s how the story goes: back in the 18th century, a chef’s apprentice called Enrico dei Castorani was preparing dinner for a table of expectant guests, when he accidentally dropped a plate of ‘scripelle’ destined for another dish into a large pot of chicken stock... Oops! There wasn't time to start over. In a moment of panic, he decided to cover up his mistake by serving the scripelle in bowls of chicken stock, claiming it to be new dish. In fact, ‘mbusse literally translates as ‘soaked’.

Fortunately for Enrico, the diners absoutely loved his new gastronomic invention. The recipe gradually became more and more popular, and it is claimed by some that the Scripelle’s more famous French cousin, the crêpe, was actually created later. Others instead believe that the crêpe came first, and see Enrico’s story as an old wives’ tale. In any case, Scripelle and crêpes are two very different recipes; from the batter to the preparation, each has its own distinctive characteristics and uses.

Scripelle are a savoury treat, whereas crêpes are a little richer and are usually enjoyed as a sweet snack. As you can see, you need only a few basic cupboard ingredients to make Scripelle, but to take it to the next level, make sure to use an excellent homemade stock – it’s ideal to prepare this a few days in advance for maximum flavour!

1. First, prepare the batter for the Scripelle. In a mixing bowl, beat the eggs, then stir in the flour a little at a time.

2. When the mixture becomes stiff, begin adding in the water a little at a time, whisking carefully all the time, so you lengthen the dough without causing any lumps.

3. Once a reasonably thick, very smooth batter is achieved, add a pinch of salt. Remember not to add too much salt, as the cheese you will be using is quite salty.

4. Leave the batter to rest in the fridge for about an hour. 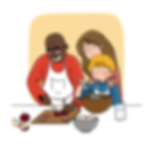 5. Once you're ready to make the Scripelle, heat a non-stick frying pan on the hob until very hot. Grease the pan carefully with a little olive oil or lard (lard was traditionally used, but olive oil is a lighter choice!) Using a ladle, pour enough batter to just cover the bottom of the pan in a thin layer.

6. Leave to cook for 20 – 30 seconds, and then flip over using a spatula or pallet knife. Cook this side for a few more seconds, then transfer to a plate. Repeat this process until you have finished the batter. You will now have a delicious pile of Scrippelle!

7. Once you have finished making the Scrippelle, it’s time to fill them with cheese. Take one at a time, scatter with grated cheese, and roll up.

8. To serve, add 3 scrippole to each bowl, and then pour boiling chicken stock over the top.

9. Leave to rest for a few minutes before bringing them to the table for everyone to enjoy. 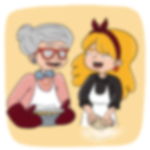 Learn to cook in Abruzzo!

Cesarine is a community of over 600 home cooks all over Italy. They love welcoming travellers into their own homes and teaching them about their regional cuisine.

If you'd love to find out more about the regional cuisine in Abruzzo, you're in the right place.

Have a look at these special culinary experiences... 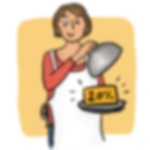 Pssst! Can you keep a secret?

The Secret Sauce readers get 20% off any experience on our website.

Just insert SECRETSAUCE20 at the checkout.

If you have any questions, you can get in touch with our friendly team! We love to help.

Our local guide to Le Marche. As told by... a parrot!

Learn how to grow herbs at home with our illustrated guide.

Or... Return to the home page!